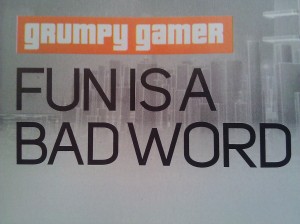 This headline might need some small explanation; and so might the image to the left. So here goes:

Repetition is boring. And ‘fun’ is overused.

The second of those points came to me when I was flicking through the latest issue of Custom PC magazine. In behind all the tech know-how I came across the Grumpy Gamer column by a guy called Joe Martin.

Now, Joe is a former colleague. And if there’s two things he knows about they are gaming (it’s his job) and English (so is that, really). So when he writes an article saying that ‘fun’ is overused in the gaming industry I believe him.

But it also made me think three things:

But hang on, what’s the issue with fun?

I hear you say. The thing is, ‘fun’ doesn’t really mean much. Enjoyable? Perhaps. Exciting? Not really. Heart-quickening? Nope. I might think gardening fun, but it doesn’t exactly get the pulse racing.

So it got me thinking about how, in this post-post-modern, instant-info, ever-hyphened world we’re all looking for things to be just one thing. Be that awesome…or brilliant, epic, legendary etc. When really, what’s wrong with being heartwarming, life-affirming or refreshing? What’s wrong with being specific about our feelings, and accepting specificity as a simpler joy?

What’s wrong with calming down?

What’s wrong with not being specific?

Well, everything becomes awesome, and awesome loses…some of its awe. After all, we don’t need as much instant verbal gratification as we think we do. I’d prefer to be called a good friend rather than some largely unnecessary super-tag for example.

What we don’t need is people always becoming legends for buying drinks; or weekends catching up with friends becoming epic. As things are increasingly labelled with such tags, our very sentences become like a kid on sugar high, setting a trajectory that simply can’t be sustained in the real world.

And what’s even worse is when the cycle is repeated. Pizza for dinner? Epic. Free yoghurt at the train station? Epic. Decent poem of average length? Epic. Epic, epic, epic, epic. Now tell me, what is epic?

What this leads to is the following: Overusing words is boring. So the antidote is to avoid overusing them.

I’d also suggest – if you want to more widely (and slightly more appropriately) describe things – avoid reading them! Avoid black and white inputs. Instead get some subtler shades into your grey matter.

Because regardless of which part of life you use language in, you know what Joe Martin is saying is true:

The language used to describe gaming is important for journalism.

Or just, the language used to describe is important. Fullest stop.

You can find me on Mastodon