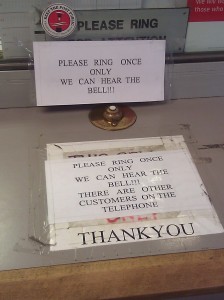 I’m not going to write what I’d planned on writing.

In this post I was going to write about how boring writing is not only writing which uses too little punctuation and so drags on and on, but how it’s also writing which plainly uses incorrect punctuation.

It’s boring because is shocks you out of engaging with it.

To further explain how would be to write what I’d previously intended. But I said I wouldn’t, so I won’t.

I will explain the image though: It’s from my local postal depot. You see the misuse of punctuation here? When I was a permanently employed, full-time journalist I went on training courses like any good journalist should. One course was called ‘Sharpening Your Style’, hosted by PMA Media Training and run by a lady called Val. Val called exclamation marks, ‘screamers’.

I love this; it’s perfect. Because it is, in one word, what the function of ‘!’ is, and because it indicates a need for sensitive use. Like the boy who cried wolf, the more you ‘scream’ in writing the more desensitised and disinterested in the screams the reader becomes. Much like watching an unrelenting horror film, you know that you shouldn’t take the action seriously because the action is pretend. Film provides a safety net. In writing we don’t need that safety net.

We can buy fiction and know that it’s fiction but want to turn that knowing off for a bit. So if the action in a piece of fiction is continually SHOUTING!!!, the reader is shocked from interest and you’ve failed to allow the reader to suspend disbelief.

In non-fiction the damage is equally bad (or more so really, because it deals with real life). Try shouting facts at people and see how far you get. You likely won’t get very far at all apart from in winding them up.

It’s why people who regularly use capitals, or uppercase, in Twitter updates get blocked or unfollowed. They’re always shouting, and nobody wants to read what they deem shouts in every other post. Uppercase words are the big, important, domineering words of the literary world.

Screamers are the indicators of some intrinsically important bit of knowledge. An alert to the crucial.

But here’s the reason why I’m not writing about my thoughts on ‘incorrect’ use of punctuation, and mainly the overuse of screamers.

Who am I to judge everybody on their writing?

As much as it may seem that this is a prescriptive blog, it really isn’t. I’ll give some opinions and advice, but writers need to know their own works and audiences better than anybody else. As such, my thoughts on ‘correct or incorrect’ (and I’ll always be wary of hard and fast judgements), are merely those. Thoughts.

A good friend of mine speaks three languages. She loves cooking, and she also writes a blog about cooking which, and I say this hand on heart, is fantastic. She writes it in English.

English is not her first language. If that wasn’t impressive enough, she not only writes in English but she manages to always be engaging in its use. Here’s her blog; I challenge you to go there and not immediately feel hungry and inspired.

And if you don’t, then I secondarily challenge you to read one of her posts and not feel instantly engaged with. Tone is so important, and her love of cooking comes across in her posts brilliantly.

And you know what, she uses screamers. Maybe two to three times in a short post. Which isn’t something natural to me, but is perfect for her tone. If writing is art, as this blog suggests, hers is art which I wouldn’t/couldn’t ever be able to authentically produce. But it is art nonetheless.

And that, essentially, is why what I would have written about ‘incorrect’ use of punctuation is wrong, and I instead wanted to end on this. Know the rules of punctuation and then do with them as you wish.

Each form of writing requires appreciation of the power of punctuation, but it’s your choice as to how you use it.